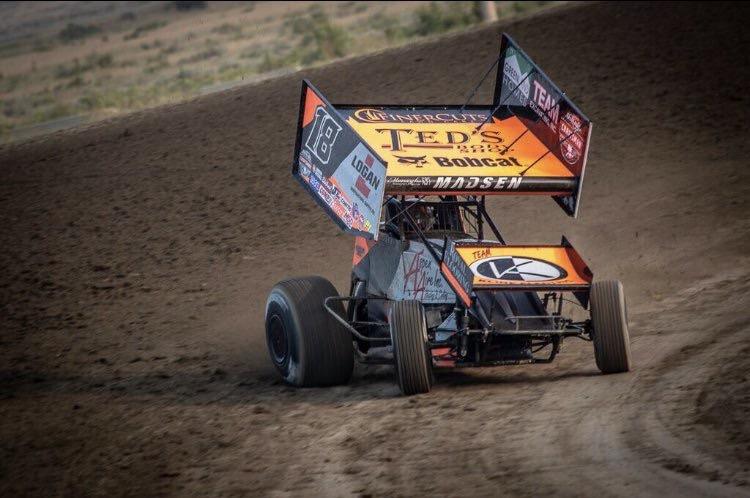 PETERSEN MEDIA- Getting into South Dakota and Montana over the weekend as ‘The Greatest Show on Dirt’ heads west, Ian Madsen and the KCP Racing team would pocket a pair of 11th place finishes.

“We had a way better car than our results show, but we have to be able to capitalize on that,” Ian Madsen said. “This is a great part of the year on the World of Outlaws schedule, and I am looking forward to getting into Washington, Oregon, and California the next couple of weeks.”

Friday night at Black Hills Speedway in South Dakota, Madsen would open the weekend up by timing the Logan Contractors Supply/Aspen Aire/Royal Flooring No. 18 machine in ninth fastest in qualifying time trials.

Gridding the field from the second row in his heat race, Madsen would flank Brad Sweet and David Gravel as his third place finish would put him in the fifth row of the 25-lap feature event.

Set for his first feature event on a new surface, Madsen would have a strong car underneath him as he raced with the driver like Shane Stewart, Brent Marks, and Rico Abreu. Fighting for a spot inside the Top-10, Madsen would take the checkered flag in the 11th position.

Saturday night the scene shifted to Billings, MT and Madsen would get his first crack at Big Sky Speedway. Seeming to adapt to the venue quickly during his first appearance, Madsen would get the night off to a great start as he timed in fourth fastest in qualifications.

Running second in his heat race to Donny Schatz, Madsen would move into the Dash where a sixth place finish put him in the third row to start the 35-lap feature event.

Though he had a strong KCP Racing entry underneath him, Madsen would get shuffled back early as he fought to stay inside the Top-10 again on this night. Searching around the speedway, Madsen would end up slipping back to 11th, as he pressured Dominic Scelzi for position late.

Unable to get around the Californian, Madsen would close his weekend out with a second consecutive 11th place finish.

“We definitely want to be inside the Top-10, and Top-5 and ultimately contending for wins,” Madsen added. “Some of these new places get tricky at times, but my guys never give up and keep working hard.”

ON TAP: Ian Madsen and KCP Racing will be in action this Friday and Saturday night at Skagit Speedway in Alger, WA.