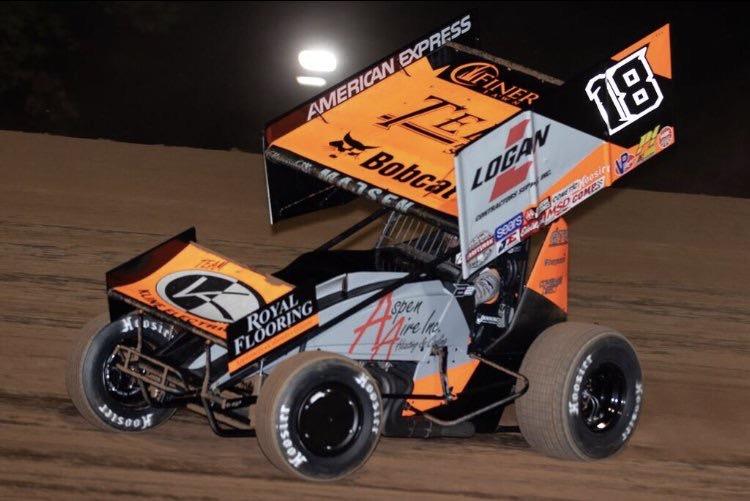 PETERSEN MEDIA- Going from the West Coast back to the Midwest, Ian Madsen would have a tough night on Friday at Eldora Speedway before putting together a seventh place effort on Saturday night at Lernerville Speedway.

“Friday night was a tough one for us, we just kind of struggled,” Ian Madsen said. “Saturday night we seemed to turn it around and have a really good night at Lernerville Speedway.”

Saturday night at the Commonwealth Clash, Madsen opened the night up by timing the Logan Contractors Supply Inc./Aspen Aire/Royal Flooring backed No. 18 machine in 12th quickest in qualifying time trials.

Starting in the second row of his heat race, the St. Marys, NSW driver would record a third place finish and move into the feature event where he would roll off of the starting rid from the 12th starting position.

With a strong car underneath him, Madsen would work his way forward on the racy surface as he quickly made his way inside the Top-10. Madsen would continue to battle with a mix of local and Outlaw talent as he carved his way to a seventh place finish to close out his weekend.

Friday night at Eldora Speedway, Madsen would time in fifth fastest in his qualifying flight before slipping back to finish sixth in his heat race from his second row starting position.

Mired in the ‘B’ Main, Madsen would battle with Rico Abreu before finishing second and transferring into the feature event. Lining up 22nd on the starting grid, Madsen would pick up a few positions over the course of the race as he would bring the KCP Racing entry home with an 18th place finish.

“It was a long trip home from the West Coast, and these guys didn’t miss a beat,” Madsen said. “We have a big one coming up this weekend in PA, and we are going to continue to work hard this week and see what we can do against the PA Posse.”

ON TAP: Ian Madsen and KCP Racing will be at Williams Grove Speedway this Friday and Saturday night.