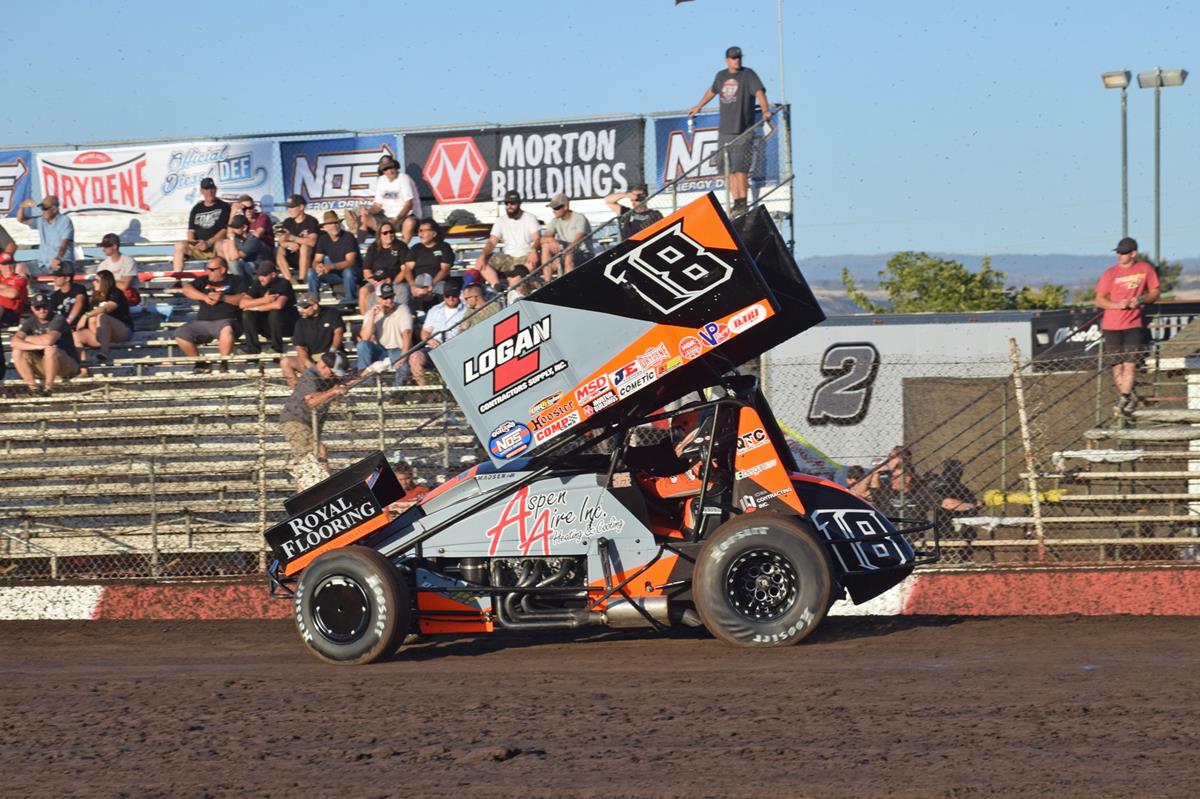 PETERSEN MEDIA- Competing in Oregon and California last week, Ian Madsen’s third place finish in Oregon would highlight his week, though the team’s results at Gold Cup weren’t indicative to how strong they were.

“We were really fast all week long,” Madsen said. “We were on the podium on Wednesday night, and I really think we had a podium car on Friday and Saturday but we just had a couple of early incidents that set us back.”

Timing in fourth fastest at Willamette Speedway in Lebanon, OR on Wednesday night, Madsen would pick up a third place finish in heat race action. Again, using the low car count format, a second place finish in the qualifier would move him into the Dash.

Starting and finishing sixth in the Dash, Madsen would take the green flag from the third row for the 30-lap feature event. On a heavy and rough surface after rains in the area, Madsen would tip toe around the tricky stuff as he found him way in third.

Holding off Donny Schatz as he chased after Gravel, Madsen would take the checkered flag in third as the series then moved towards California.

Kicking the Gold Cup Race of Champions off on Friday night, Madsen would time in fourth quickest aboard the Logan Contractors Supply, Inc./Aspen Aire/Royal Flooring entry before racing to the heat race win.

Continuing his run of ‘good’ draws in the Dash draw, the five pill lined the St. Marys, NSW pilot up in the third row of the sixth lap shoot out as he would finish fifth.

Battling hard inside the Top-5 when the race came to life, an extended green flag run would actually see Madsen endure some contact to his nose wing, which changed his car drastically.

Trying everything he could to adjust his lines to keep his machine near the front, Madsen would close Friday night out with a 10thplace finish.

Back in action for the Gold Cup finale on Saturday, Madsen would time in seventh fastest before picking up a fourth place finish in his heat race.

Lining up 10thfor the feature event, Madsen would work his way forward as he got up into the 7thposition. Getting into seventh, lap 11 contact would result in front end damage for Madsen and he would be on the hook and headed back to the work area.

With a lot of helping hands, Madsen would make the call with a battered car. From the back of the pack, a frustrated Madsen would carve his way forward and get back up to the Top-10 as he would close his weekend out with a ninth place finish.

“We really had good speed both nights, and it is a bummer we didn’t really finish where our team deserved to,” Madsen added. “We will get back to work this week and try again in Placerville, CA, Stockton, CA, and Calistoga, CA.”

ON TAP: Ian and the KCP Racing team will be in action on Wednesday night at Placerville Speedway.

PETERSEN MEDIA:Petersen Media is an agency that can handle your public relations, marketing, and any other promotional needs. Petersen Media utilizes multiple tactics to help you reach your intended audience, and boost awareness.