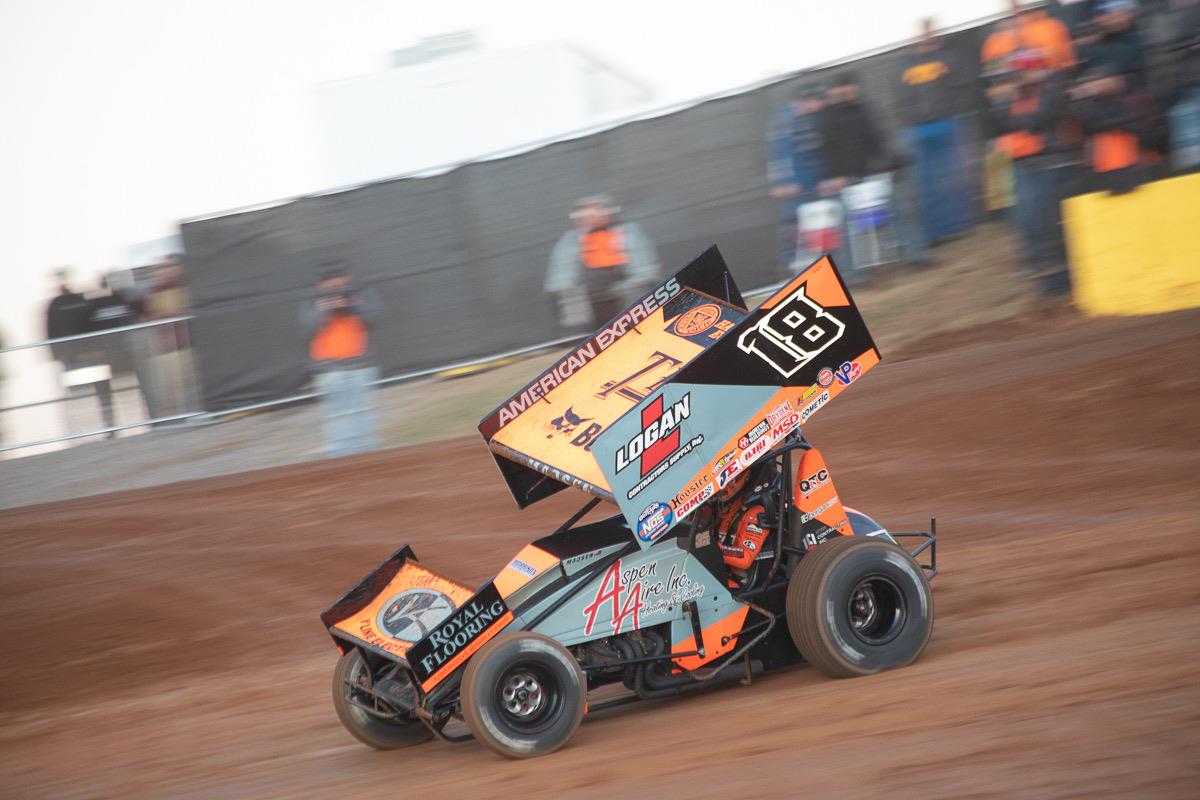 PETERSEN MEDIA- Traveling to Charlotte, NC for one final weekend of racing with the World of Outlaws in 2019, Ian Madsen’s Friday night run of 13th would highlight his weekend after an early tangle on Saturday all but ended his night.

“It was a frigid weekend, but my guys gave me a great effort,” Ian Madsen said. “We got our weekend off to a decent start with qualifying on Thursday and Friday night we ran decent. Saturday night cars got out of shape in front of us on the start and it tore us up pretty bad.”

With the action kicking off on Thursday night with two separate qualifying sessions to set the field for Friday and Saturday, Madsen would time the Logan Contractors Supply, Inc./Aspen Aire/Royal Flooring backed No. 18 entry in third fastest for Friday and eighth quickest for Saturday’s show.

On a wickedly cold Friday night, Madsen would take care of business in his heat race as a win propelled him into one of the twin Dashes. Finishing second in Dash one, Madsen would line up in the third starting position for the 30-lap feature event.

Slipping back to sixth on the start of the race, Madsen would look to keep his machine inside the Top-10 as passing would be tough on this night would the track extremely slick and abrasive. Falling back a few more positions in the race’s waning laps, Madsen would cap the night with a 13th place finish.

Saturday night saw the St Marys, NSW driver finish fourth in his heat race, but in the six-heat format he would not transfer into the feature event.

Forced into the LCS, Madsen would pick up a fourth place finish and successfully race his way into the final feature event of the season with the World of Outlaws.

With the first start getting waived off due to a yellow, the next attempted start would see cars get together in three and four and leave Madsen with nowhere to go.

Going to the work area with damage to the rear of his car, the KCP Racing crew would change what they could and get Madsen back on track.

Beaten and battered, Madsen would battle a wicked vibration through the 30-lap feature as he ended his World of Outlaws season with an 18th place finish.

“It wasn’t the end result we were hoping for, but a lot of good came from this year,” Ian Madsen said. “I have to thank everyone involved with our team for their hard work and dedication. We will have some news out soon about what our exact plans for 2020 will look like. Again, thanks to everyone for their support.”

ON TAP: Ian and the KCP Racing team have concluded their 2019 season.