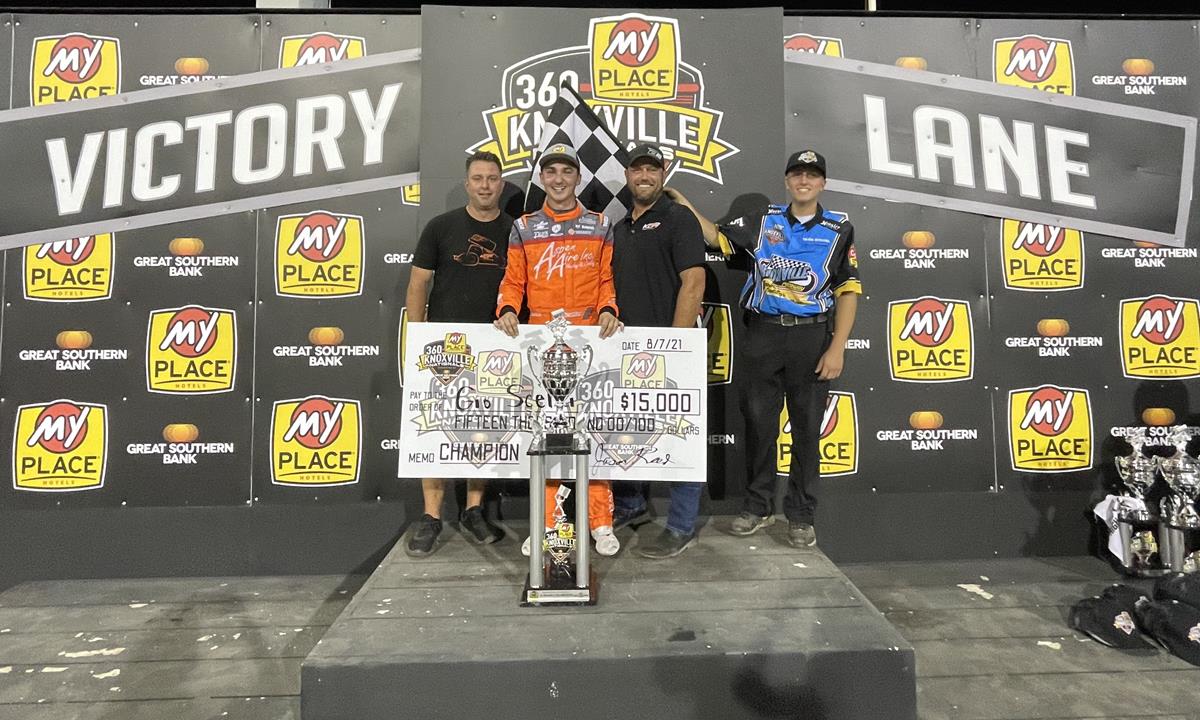 KNOXVILLE, Iowa (August 7, 2021) – Gio Scelzi put himself on top of the 360 sprint car world Saturday night by winning the 31st Annual My Place Hotels 360 Knoxville Nationals Presented by Great Southern Bank. The Fresno, California native’s win came aboard the KCP Racing #18 and was put $15,000 in his coffers.

Daryn Pittman found the low groove to his liking, as he led the 25-lap main event early over Shane Golobic, Scelzi, Clint Garner and Sam Hafertepe Jr. Scelzi worked by Golobic for the runner-up spot on lap two, and Justin Henderson entered the top five.

Henderson continued his climb, passing Garner for fourth on lap five. The South Dakota pair’s battle was not over, however, as they traded the spot three times in the next four laps, with Henderson eventually nailing down the spot.

Meanwhile, up front, Scelzi briefly moved by Pittman in turn two for the lead, but surrendered the spot by the checkered flag on lap nine. On lap twelve, several cars in the back were in a gaggle and Brian Brown tipped over. He returned to race, but pulled off shortly after.

Pittman led Scelzi, Golobic, Henderson and Garner back to green. Brooke Tatnell jumped from seventh to fifth on the restart. Henderson shot by Golobic to enter the top three on lap 14, and Tatnell followed him into fourth on lap 17.

Pittman was trailed closely by Scelzi and the last five laps really heated up. Scelzi went through the middle of turn four to edge ahead on lap 23. Pittman stormed back on the bottom to lead at the white flag.

Pittman attempted to steal Scelzi’s high groove in one and two. Scelzi went high into turn one, and then turned down to the low side of turn two in what would be a winning diamond move.

Scelzi raced to the checkers ahead of Pittman, Henderson, Golobic and Tatnell. Hafertepe, Garner, Scott Bogucki, Terry McCarl and hard-charger Tyler Courtney rounded out the top ten. Matt Covington started the night out by winning the D main, and Michael Faccinto took the C main. Cory Eliason claimed the B main.

“I was running as hard as I could,” said Scelzi in Victory Lane. “My car was unbelievable. I love Bernie (Stuebgen). I can’t believe it. To win a crown jewel like this is unbelievable. I love this place. Pittman was so good on the bottom, I just never gave up. He’s such a smart racer. He broke my momentum going into one, and luckily I could drive back underneath him.”

“We just got beat,” said Pittman. “Those are hard to take as a driver. I thought we were good. (Gio) has been phenomenal since last week when he won here, and he unloaded and ran really well. To get that close and let it go on the last lap is tough. This team works really hard and we’ve been getting better. I’m having fun driving the car. Congratulations to Gio and the whole KCP team. I’ve got to give it to him. I think the bottom was the preferred line and he drove by me. I fully expected him to come across my nose and he didn’t. He ran his line and flat beat me clean.”

“We started eighth and had a quality racecar,” said the third place Henderson. “The motor was running really well, and it got a little hot under the red and spit out a bunch of water, but this is the 360 Nationals and we wanted to win. Congratulations to Gio, and good job to Daryn Pittman, but if we had started a few rows farther up, we might have had something. Eighth to third is nothing to kick the dirt about, and we’re really proud of this team.”