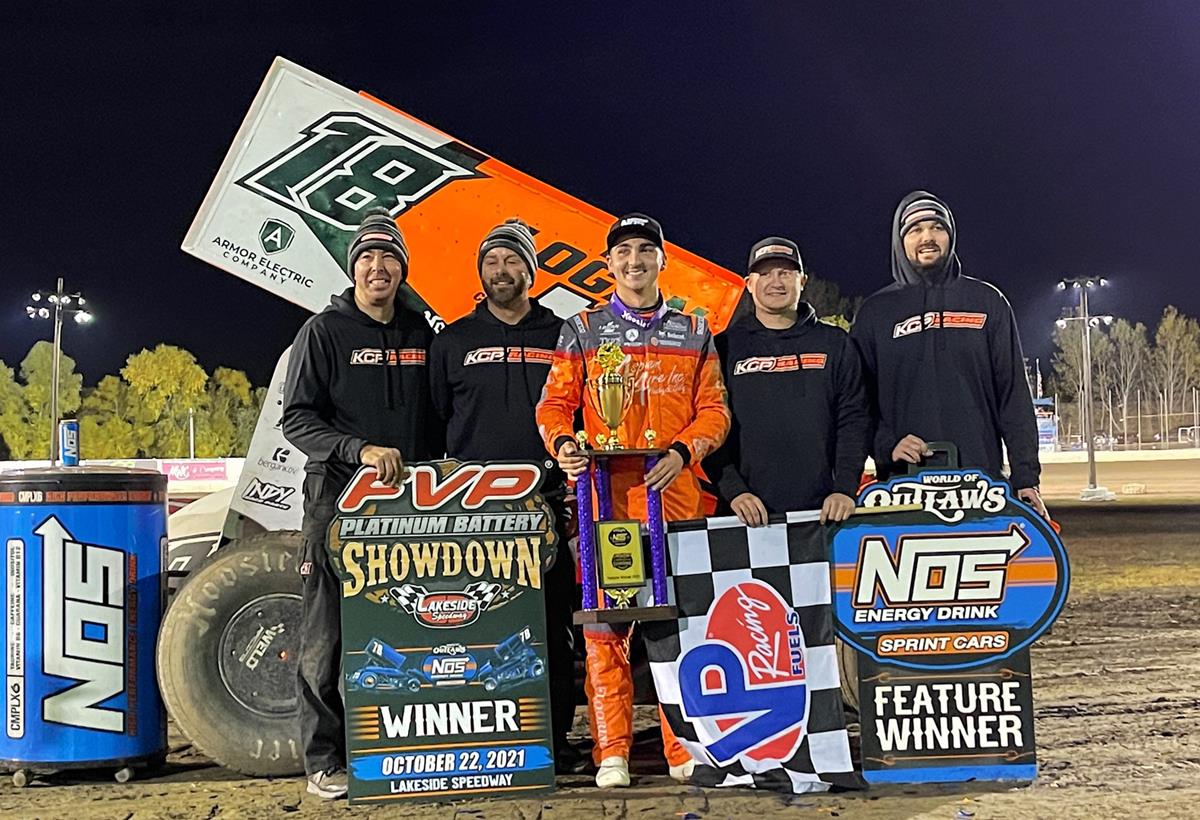 It wasn’t Patrick Mahomes crafting a perfect two-minute drill, but instead, Giovanni Scelzi scoring a comeback win in Kansas City on Friday night.

Much like the Chiefs’ dazzling superstar quarterback, this California-born teenage sensation never wavered as the clock ran down and offered an epic rally to deliver a thriller in front of the K.C. fans.

After starting pole position, the 19-year-old fell back to as far as fourth before rallying to take the lead away on the final restart with four laps left at Lakeside Speedway. The kid they call “Hot Sauce” brought the heat on the only single-file restart of the race as he tracked Madsen down the frontstretch, throttled the high side through turns one and two, and then cleared the #14 with a pitch-perfect slidejob into turn three.

It’s Scelzi’s third career win with The Greatest Show Dirt, but his first this year, making him the 15th different winner in the World of Outlaws NOS Energy Drink Sprint Car Series in 2021.

Most notably, the win marked Scelzi’s first with the Series aboard the KCP Racing #18. He joined the team in July 2020 and brings an Outlaw win back to the stable in his 58th try, which is the first for KCP since March 9, 2019, when Ian Madsen won at Thunderbowl Raceway.

Once clear of Madsen for the race lead, Scelzi controlled the final four laps and cruised to a 0.893-second margin of victory at the checkered flag.

“This is a huge relief,” Scelzi said in victory lane. “I think the monkey is off our back. No matter how low the lows get, this team never gives up. I was hoping a caution would come out and sure enough we got it. I knew that was my only chance to get Kerry and it worked perfect. It was fast, but the track widened out well.”

“I fell back early when Aaron Reutzel tried to crash me on the frontstretch,” a smirking Scelzi added. “It bent the tie rod, drag link, the steering was almost sideways, but it just gave me some extra motivation to race that much harder.”

Scelzi’s victory is KCP Racing’s first World of Outlaws win since March of 2019. [Trent Gower]
Donny Schatz also capitalized on the final restart and moved up to finish in second-place aboard the Carquest, Ford Performance #15. It’s the 10th runner-up result of 2021 for the Tony Stewart/Curb-Agajanian Racing team and moves them into third in the championship standings.

“I was hoping we’d get more traffic, but the yellows kept coming,” Schatz said. “Gio was so good on those restarts, it’s just the way it played out. The guys did a great job and we made the right adjustments.”

After leading the opening 26 laps, Kerry Madsen settled for a third-place effort aboard the Tony Stewart/Curb-Agajanian Racing #14. It’s a bittersweet result for the Australian, but still, his eighth podium finish in 20 World of Outlaws starts this year with TSR.

“It’s unfortunate for this Tony Stewart team,” Madsen admitted. “We had the best car and I had the opportunity to close it out, but just didn’t do it. Being disappointed with a third-place finish means you’re doing something right, though.”

Aaron Reutzel collected his best World of Outlaws finish of his SRS #8 tenure in fourth-place, while Logan Schuchart drove the Drydene Performance Products #1S to a fifth-place effort and gained ground in the battle of fifth in the championship standings.

UP NEXT: The World of Outlaws NOS Energy Drink Sprint Car Series will head south for a Halloween weekend doubleheader at Lawton (OK) Speedway on Friday, October 29, and Devil’s Bowl (TX) Speedway on Saturday, October 30. After that, the 2021 season concludes with the NGK/NTK World Finals at The Dirt Track at Charlotte on November 4-6.